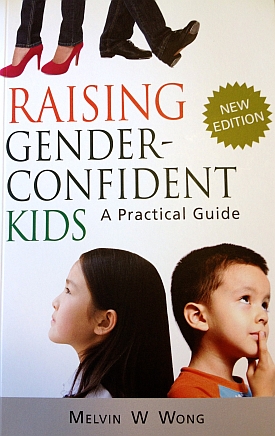 This book by Dr Melvin Wong (PhD), a Clinical Psychologist based in the US, covers several key child developmental issues on gender identity, aspects that Asian parents may not be aware of in raising their children in today’s world.

The main topics covered in his book include:

Melvin introduces a few key psychological theories and terms fundamental to understanding the formation of gender identity, and presents these in the context of the collective Chinese culture and traditions, as distinct from the individualist based Western cultural model.

The concept of ‘psychological birthing’ by Mahler, Pines & Bergman (1975) explains how a child undergoes the process of developing a sense of self and autonomy through separating from the mother by learning social and emotional independence. This is particularly significant as it underscores the need for a son to healthily “detach” from his mother and successfully “attach” to his father or father-figure, in his psychological growth and development: a process which begins at weaning.

Unlike a daughter who continues to find her gender identity with her mother since both are female, a son needs to discover a masculine identity that a father provides through consistent involvement and healthy male bonding.

Melvin observes that “defensive detachment” from a father (i.e. when a son does not attach with his father, normally as a consequence of rejection or absence), can cause a boy to experience “defensive attachment” (where he overly clings to the mother to protect himself from loss and emptiness). An unsuccessful detachment-attachment process can affect a son’s learning what it feels like to be a male, especially from the age of three and a half.

Stage 1: From Birth to 4 years – Parental Same-Gender Attachments
This is the stage where children, especially boys, intuitively learn how to reach their own emotional equilibrium as they separate from the mother, and become aware of the presence of the father. Children develop a sense of personal confidence and security upon successfully negotiating this stage of growth.

Stage 2: Kindergarten to Lower Primary (P1-P2) – Social Same-Gender Attachments
Children learn how to be assertive, truthful yet respectful of themselves as well as others in their pursuit of what they want. Additionally, it is important to encourage bonding for boys with same-gender siblings, and develop a sense of belonging with other boys.

Stage 3: Middle to Upper Primary (P3-P6) – Social Opposite-Gender Curiosity
This is a crucial time as pre-teens become more conscious of their gender development and start to compare their own development against those of their peers. They become more aware of themselves as individuals, and this is where an accurate self-awareness can help the child develop a healthy self-esteem.

Stage 4: Lower to Upper Secondary (S1–S4) – Social Opposite-Gender Familiarities
Characterized by self-centeredness and a striving for manhood/womanhood, this is also when the peer group becomes foundational to children’s sense of achievement.

Stage 5: Post-Secondary Years – Social-Sexual Opposite-Gender Familiarities
Children in this stage of growth begin to learn how to form close personal relationships with the opposite gender, and develop the ability to relate effectively and intimately with them.

Stage 6: Early Twenties – Social-Sexual Opposite-Gender Intimate Attachments
The early adulthood years involve the ability to face and not fear commitment in a romantic relationship. The outcome of “healthy gender development is the ability to make a commitment to a long-term relationship” (page 79) and is a sign of maturity.

At each stage, Melvin provides guidelines to support parents in addressing gender identity difficulties, with suggestions for both fathers and mothers on how to manage various challenges ranging from pornography, to sexual abuse, addictions, risk-taking behaviors to name a few.

The book also gives a most useful glimpse into what gender-confident youths might be like, with “their emotions becoming more balanced, even and stable” (page 72 to 74). Having a secure attachment with both parents through the early years acts as a strong foundation for the youth to “weather turbulence and challenges in their lives”. They are able to be open and comfortable to receive support and guidance from their parents and gradually expand this trust to other adults (like teachers). These healthy adult relationships act as reference points and help in problem-solving and exploring the complexity of the world around. As their thinking and reasoning capabilities develop and expand, they are able to “integrate extreme beliefs and positions and put up with ambiguities” beyond right and wrong, skillsets critical for adult maturity.

In their mid-teenage years, children are able to appreciate differences in lives of others and in time be attracted to their opposite gender peers. During this normal phase of development, boys will be curious about the complexities of their relationships with girls. Gender-healthy girls will find gender-healthy boys a “welcome emotional balance to their lives”, derived from healthy relationships with their fathers. These healthy friendships will blossom into social relationships, leading on to dating, courtship and eventually marriage.

Melvin concludes the book by exhorting parents to bond with their children early in their lives, especially crucial before the age of 8. He also gives suggestions for intervention strategies and support for parents.
In summary, raising gender-confident children who are emotionally and socially healthy and secure requires parents to pay attention to:

About the Author : The Dads for Life Resource Team comprises local content writers and experts, including psychologists, counsellors, educators and social service professionals, dedicated to developing useful resources for dads.