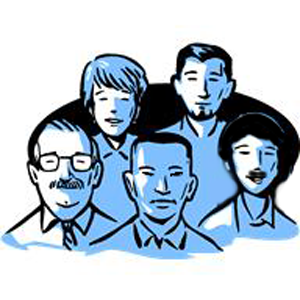 Dads play a dual role as both a professional and a parent in a modern society.

As a professional he has to be logical and rational when responding to challenges, resolving problems, motivating others or monitoring his own performance.  Businesses, engineering companies, academic institutions and most workplaces need systems that are consistent and predictable. Problems have to be examined objectively and proposed solutions have to be effective and efficient. Hence, in dealing with the corporate world, fathers usually have to exercise their logic which is housed in the left side of their brain.

Most Dads will agree that managing colleagues and customers can be much easier than handling their own children. They can climb the corporate ladder, but at home their children climb over them. They can win contracts and customers, but they lose an argument at home. They can make predictions of markets and economies, but never seem to know what a teenager will do next. It is no wonder that some fathers prefer to work late and leave the roller coaster world of bringing up children to the mothers.

When the father tries to rationalise a child’s tantrums, both sometimes become frustrated. When he monitors his children’s school work every day, more stress may be generated. When he tries to troubleshoot his teenager’s problems, the teenager may rebel.

Worlds of work and home are totally different and need different mental skill sets. On coming home after work, the father may not realise that the left side of his brain still functions actively as he ponders over an unresolved problem or plans priorities for the next day. He therefore steps over the threshold of his home without changing his mental threshold.

There are two meanings to this word threshold. The literal meaning of threshold is a piece of wood, metal or stone that forms the base of the front door. The other meaning is the point or level at which something begins or changes.

Without this self-awareness, some fathers may face a psychological barrier. They see their wives as colleagues and children as subordinates. Not surprisingly, the words they use reflect a very corporate conversation. For example, to his wife he may demand, “Why isn’t dinner ready?” as he does not see dinner as a family gathering.

He asks his children, “Have you finished your homework?” instead of hugging them. Sometimes, even if homework is done, no praise is given.

Is there something wrong with the father? No, but it can be helpful if he knows more about how his brain works versus how his children’s brains develop. In a ground breaking research on the human brain, the American neuroscientist, Dr. Paul MacLean explains that it consists of three parts – the reptilian complex, the limbic system and the neo-cortex.

While the three parts of the brain are interconnected, not all parts develop at the same time. The reptilian and limbic brains are developed in the early stages of life. The neo-cortex develops progressively as the child matures into an adult absorbing information and gathering memories. It learns from experiences, activities and processes higher-order thinking like logic, language, abstract ideas and so on.

This explains the essential difference between a father and his children. When children communicate with him, they are not able to use words to accurately reflect their intentions. Rather, they express their emotions out of the limbic brain. For example, a child may express anger through a louder voice, higher pitch or a faster rate of speaking rather than say, “I’m furious.” Hence if a father does not sense the undertones of his children’s emotions but takes their words at face value, he will not understand what his children are trying to say.

Much of children’s communication lies in the non-verbal realm. A good practice for Dad is to pause, take a deep breath at the door of his home and remind himself that his work-day is over. He needs to happily hug his wife and children. As they tell him about the day’s activities, he needs to listen patiently. They want his attention and affection, not his diagnosis. If an argument starts, they want to be heard and affirmed and not analysed. A much more pleasant conversation can therefore take place when the father ‘switches off’ his left brain and leaves it off until the next day at his office.

The message for today’s Dads is that they have to make that necessary switch at the threshold of their homes.